English
Related Products
Check items to add to the cart or 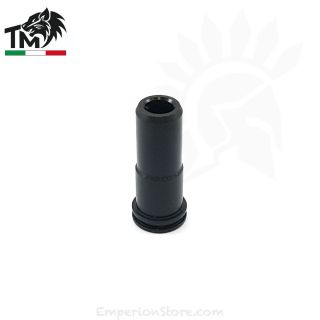 The size and position of the housing holes ensure perfect adherence of the front stop of the cylinder head, made of rubber, on the plates of the GearBox. The millings on the upper part of the body of the cylinder head reduce and mitigate the vibrations made from the impact of the piston and ensure the drastic reduction/elimination of the risk of head breaks of the GearBox plates. The spout of the cylinder head has an external diameter of 4,70mm, its rounded at the top for free sliding of the nozzle and its slightly longer than other products on the market to help the nozzle to slide as linearly as possible inside the T-HopUp chamber. The TopMax cylinder head is compatible with both V2s (such as M4, MP5, G3, Minimi), and V3s GearBoxes (AK and similar). To obtain the maximum performance in smoothness, we recommend coupling our cylinder head with TopMax nozzle. To mount the PAD we recommend to have a look at the assembly tutorial at the link www.facebook.com/TOPMAXsoftair/videos/269555617244706/, and using Loctite SuperAttak Gel or similar to do it.